Is it the right time to buy gilt funds? 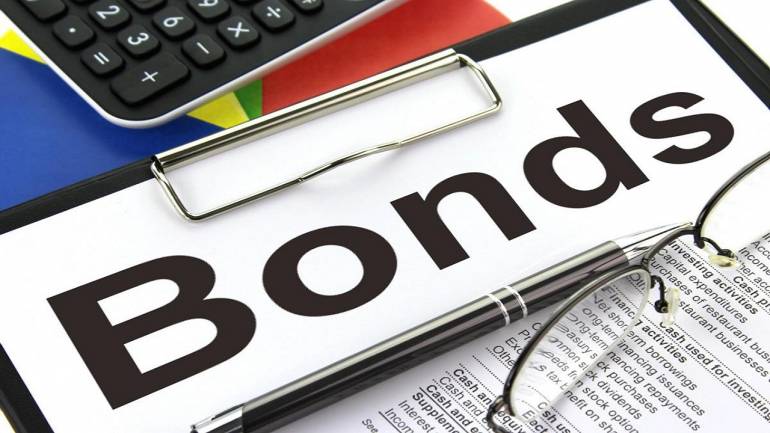 In an environment where many debt fund categories are under pressure, gilt schemes have had a solid run over the past one year – delivering 11-18 per cent returns, a bit more in the case of direct plans. Even longer term performances over three and five years looks good, with many schemes turning in near double-digit returns. These returns are higher than some equity fund categories as well. Given that there is no risk of default in government securities, they present an enticing investment case.

To be sure, the rally in government securities (G-secs) was in the making for a while now. Three successive interest rate cuts, totaling to 75 basis points, inflation being well below the RBI’s(reserve bank of India) expectations and a slowing global economy meant that yields on the 10-year G-Secs are down nearly 170 basis points from the peak level of 8.18 per cent in September last year, around the time of the NBFC crisis. In the budget, the union government announced that it would also borrow from the overseas markets directly, which meant that yields would not harden domestically.

Yields and bond prices move in opposite directions. So, when the yields on the 10-year G-sec fell to 6.47 per cent from 8.18 per cent, there was a massive rally in prices.

Naturally, gilt funds that invested in government securities and debt papers of the States reaped the benefits of the rally, with their NAVs expanding significantly.

As a retail investor, should you rush to buy gilt schemes? Well, not quite. Experts and analysts flag multiple factors that you need to be aware of before taking the plunge. They advise making small allocations with a mild exposure, if at all, as a part of your larger debt portfolio. 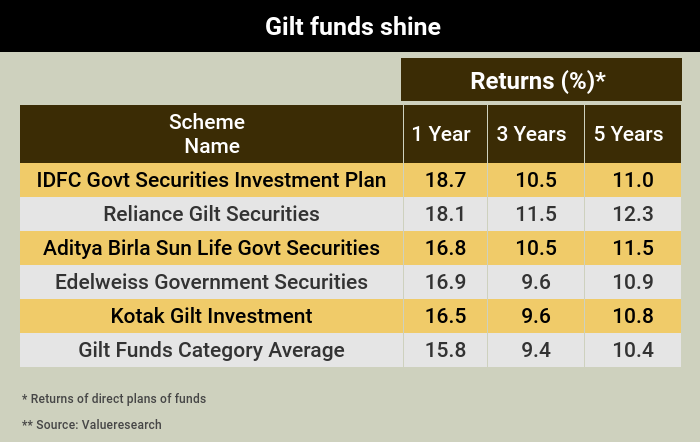 Yes, the one-year returns and even long-term performances look good for gilt funds. Yet, for retail investors seeking to get in now, it may be a case of entering at the peak or near the peak of the 10-year g-sec yields.

Says Deepak Jasani, Head Retail Research, HDFC securities, “Any increase in Gilt fund exposure through lump-sum investment at this stage will mean that after some appreciation in NAV, yields could start to rise, affecting further rise in NAVs. Gilt fund should ideally be accumulated when yields are at a high level and have started to fall.”

Ashish Shanker, Head-Investment Advisory, Motilal Oswal Private Wealth Management also emphasises on this aspect and adds the tax angle as well for investors. He says, “Interest rates have gone through various cycles wherein the duration of each cycle has been in the range of a few months to one to three years.

From an investor’s perspective, it is very difficult to time the entry and exit in gilt funds, which are subject to interest rate volatility. Also, one needs to be cognizant of the taxation angle of long term indexation benefit which defines the investment holding period of a minimum of three years. So, if one chooses to exit at the right time in the cycle (hindsight) before three years, the capital gains would be taxed at the marginal tax rate.”

While gilt funds may have delivered exceptional returns in the falling interest rate scenario, the same performance may not be repeated in all cycles. So, dynamic bond, credit opportunities and high-quality short-term funds have delivered returns in various interest rate cycles from January 2010 to September 2018, as the table provided by Motilal Oswal Private Wealth Management (compiled with data from Bloomberg and ACE MF) shows.

One aspect for retail investors to note is that as the credit risk is absent in government securities, the return expectations too need to be tempered, as there would be no spreads to make as in the case of corporate bonds. Also, gilts do face the impact of interest rate cycles and gyrate accordingly.

When there are two bonds with different credit qualities, but the same maturity period the credit spread is the difference in their yields. Usually, credit spreads are calculated as a difference between corporate and sovereign bond yields.

Deepak of HDFC Securities says, “The more the risk, the more the return and lesser the risk, lesser is the return. So, gilt funds, being one of the least risky funds (in terms of credit risk—though they carry marked-to-market risks due to yield changes), you cannot expect exponential returns.”

Says Devang Kakkad, Head of Research, Equirus Wealth Management, “Gilt fund returns are volatile with particularly sharp movements during reversal of interest rate cycles. They tend to lose out on the higher yield on account of credit spreads available in other categories of debt funds. Hence, Gilt funds can at best be a tactical allocation in the portfolio.”

So what should investors do?

Experts suggest investing only in schemes where the securities are highly rated (AAA) and where fund managers make tactical allocations to government securities as a part of the overall portfolio. Some also suggest staying with low-duration funds as these tend to take minimal credit risks and are not affected majorly by interest rate movements.

Ashish says, “An individual investor should not invest purely into Gilt Funds (short/long) since it would be challenging for the investor to time the interest rate cycle. However, one can invest in high quality (AAA oriented strategies) with short to medium term duration wherein the fund manager may tactically invest in short and long term G-Secs/State Development Loans (SDLs) to take advantage of the interest rate cycle. Having said, one can also look at the open-ended roll down strategies investing in high quality AAA/Government Bonds/SDLs, so as to lock in at high absolute yields and in turn mitigate interest rate risk.”

Adds Devang, “While there is possibility of gilt fund outperformance continuing, investors should however avoid duration play in their portfolio. We continue to have preference for low duration and ultra-short duration schemes for debt investors with long-term horizon. Avoiding duration play will help investors minimize interest rate risk while reducing returns volatility.”

Investors shouldn’t be taken by the recent return in gilt funds and make a mad dash for these schemes. Given the fluctuation in interest rates that is possible, gilt fund NAVs too would gyrate, thus necessitating timing of entry and exit – a task that would be challenging for normal retail investors.

As a part of their larger asset allocation, a portion of their debt portfolio (say 20 per cent) can be allocated to gilt funds. A major portion of the debt fund portfolio should be parked in low-duration and corporate bond schemes that invest only in instruments with the highest ratings, including in g-secs.